This weekend is Father’s Day, which makes it time for memories about Dad.

Growing up, I thought all dads drank SunDrop and read Discover magazine when they came home from work. I was surprised to learn other families didn’t have observatories with telescopes in their backyard…a fact that was less amusing when I was a teenager and found out that some of my friends thought it was an outhouse.

Things I remember about my dad when I was young? He could bounce a ball on his nose like a sea otter.  When I was small, he let me sit on his shoulders …calmly removing my hands when I accidentally placed them over his eyes.

Determined to teach me to swim at age 3, he spent endless hours at the neighborhood pool teaching me to jump in and turn around and swim back to the side. He refused to let me get upset when Bambi’s mother died, or when a wolf tried to kill a deer on Lassie. This, he explained, was simply part of the circle of life.  There was no need to cry – the wolf was just trying to feed her babies.

I wasn’t much for tea parties, but he did have to endure five years of dance lessons and a trip to the home of the Cabbage Patch dolls in Cleveland, Georgia. I don’t know who was more excited when I started playing basketball – me or him.

Gifts I have given him over the years?

A pencil-holder cup I made from Care Bear wrapping paper.

A gold tie clip with an American flag.

I think one of his proudest moments was introducing me to Star Trek…which I actually liked. On Wednesday nights if you wanted to watch anything at our house, or even hang out in the den, you had to be quiet or watch Star Trek: The Next Generation. He patiently explained the difference between Vulcans, Klingons and Romulans in the old movies, pointing out Spock and Captain Kirk like he was introducing me to old friends.

He plotted our family vacation itinerary down to 15-minute increments, and decided space could best be used in the back of the car by storing our clothes in large Tupperware tubs. It took me until I was 16 to discover that all families didn’t wax their car before going on vacation, a fact he exploited for years.

As a teenager, while all my friends were getting summer tans, he refused to let me lay out in our backyard. Not because of skin cancer, but because he figured if you were laying on your back in the yard you needed something to do.

Things I owe to my dad? An appreciation for national parks, SEC football, vacation and “mad money.”

Sometimes it was OK to break the rules, he said. Like the time he got caught driving the wrong way in the school drop-off pool  and got in trouble with the traffic monitor.

My dad’s style was to roll out of bed 15 minutes before he had to take us to school, driving us to school in his pajamas. To this day, I can still hear him saying, “Make good decisions,” as we climbed out of the car.

He bought oranges, girl scout cookies, magazines, candy bars or whatever we happened to be selling to go on some fundraising trip.

One of the things I will always remember about my dad is how he always let us climb up in his lap. Sometimes, absorbed in National Geographic or some other program, I think we actually surprised him as we started trying to climb into the recliner, but he never turned us away.

I don’t know what the highest sin was on my dad’s list, but he made it clear that if we ever smoked a cigarette, he would kill us.

So I suppose at this point I guess should say, “Thanks Dad, for helping me reach my goals and dreams,” but what I should really say is, “Thanks for helping me not screw up my life.”

So Happy Father’s Day, Dad. Give the man an oatmeal-raisin cookie (his favorite), and let him order whatever pizza he wants, even if it’s not diet-friendly and no one else will touch it.

It’s your day, and I hope you enjoy it! 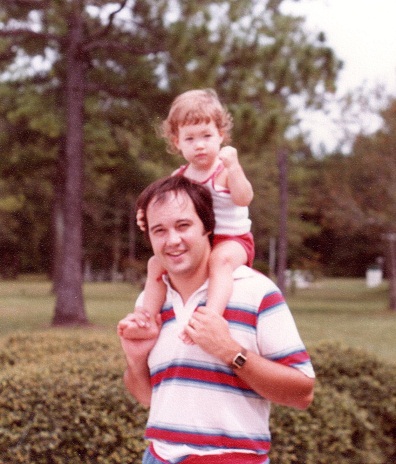